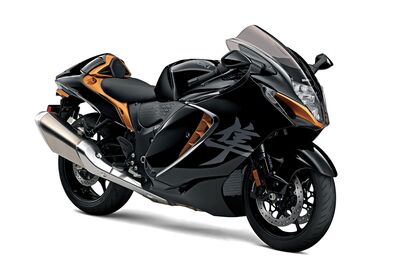 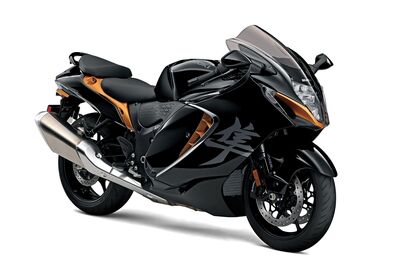 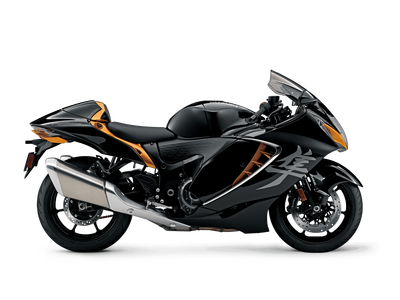 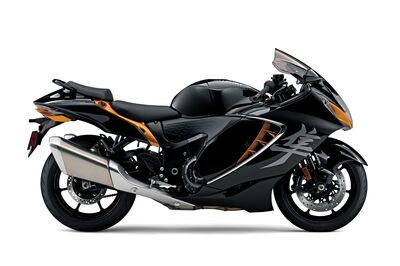 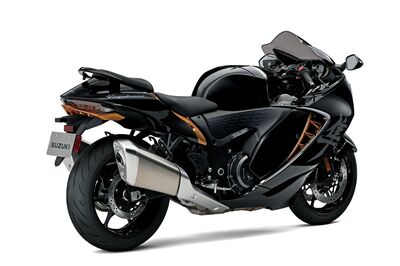 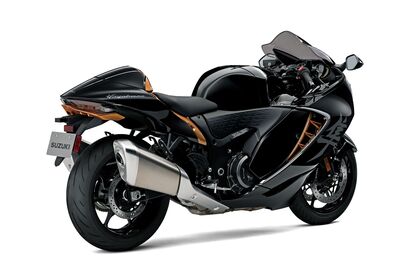 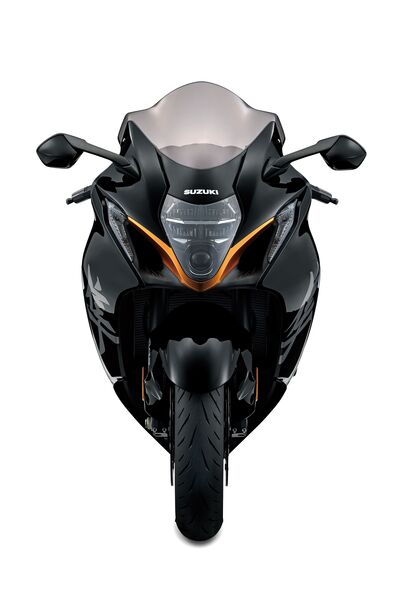 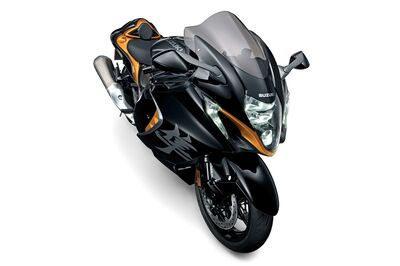 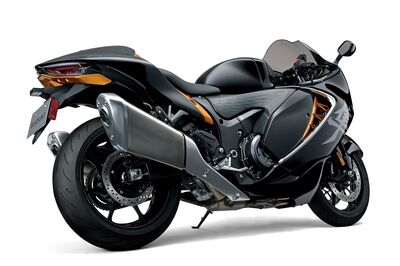 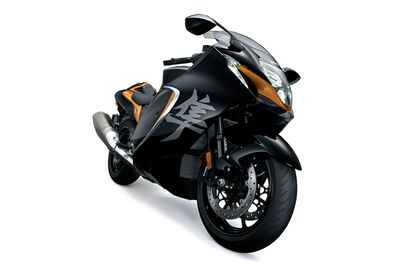 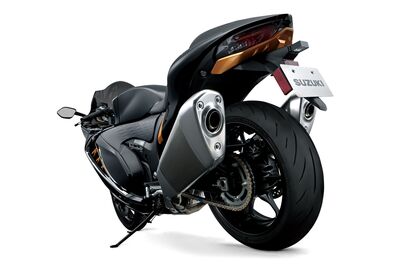 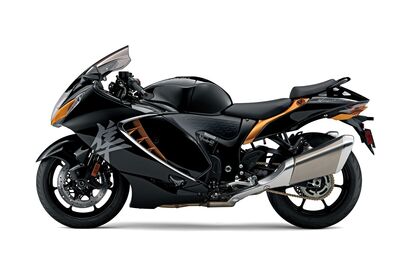 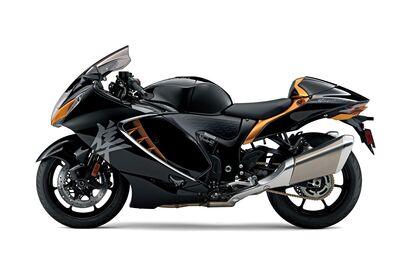 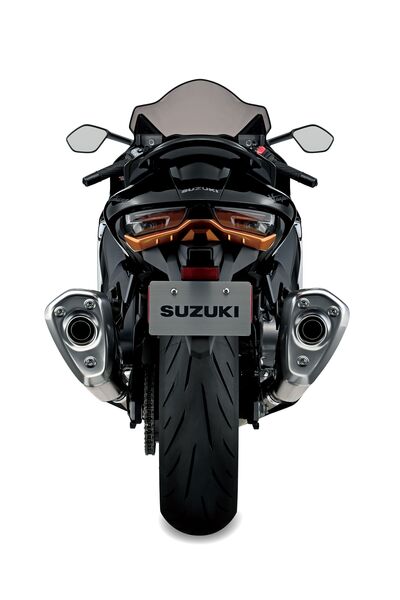 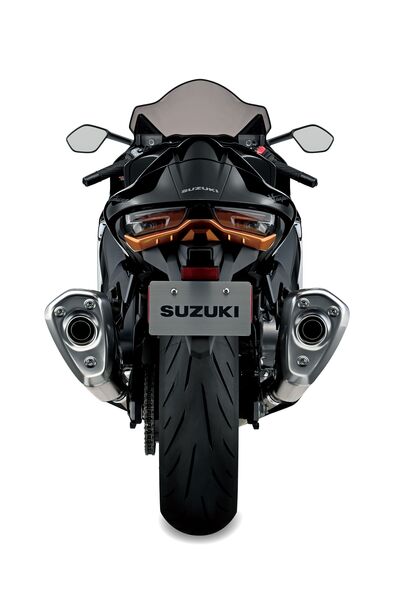 
This machine needs no introduction! The legendary Suzuki Hayabusa burst onto the scene in 1999, launching the hyperbike market and dominating it ever since. Now back in its third generation, the new Suzuki Hayabusa is the best that it has ever been; with improved aerodynamics, increased torque in the low-to-mid range and a comprehensive electronics package, there’s never been a better time to be a Hayabusa owner.

With development beginning over 10 years ago, the new Suzuki Hayabusa set about to improve on the iconic second generation machine without compromising the legacy that it left behind. The designers at Suzuki refused to compromise or compete with other manufacturers, instead choosing to focus on making the 2021 Suzuki Hayabusa the best it could be.

The new Hayabusa features the tried and tested 1340cc, liquid cooled, four stroke, DOHC, 16 valve, inline four engine that its predecessor used, with refinements being made to ensure efficiency and durability. These improvements include redesigning key parts of the engine including pistons, connecting rods, a revised crankshaft, bearings, clutch assembly and much more to offer the best in performance whilst meeting the strict control measures for Euro 5 emission regulations.

These regulations have also led to improvements in the exhaust system, which features changes to the catalytic converters and the inclusion of a second oxygen sensor to meet the requirements. However, the best part of the newly designed exhaust system is the connecting pipe between the header pipes of the first and fourth cylinders, which aids in delivering robust power and torque at the low-to-mid range, making this the most exciting Hayabusa yet.

For the first time, the Suzuki Hayabusa utilises a ride-by-wire throttle body for increased connection between rider and bike. These electronic throttle bodies are controlled in thousandth-of-a-second increments for a sharp, crisp response with each twist of the throttle. This change in throttle bodies has also prompted a change in the air box, which is now enlarged by 1.2 litres and a change in the Suzuki Ram Air Direct (SRAD) intakes, which are help increased the flow of air into the airbox, helping contribute to the powerful engine statistics.

The aluminium chassis and swingarm used on the previous Hayabusa makes an appearance here, with subtle refinements designed to improve performance and rider comfort. The rear seat rail is now 700grams lighter, which when used in conjunction with the lighter exhaust silencer design improves the weight distribution to a perfect 50:50 for the most balanced Hayabusa yet. The handlebars now sit 12mm closer to the rider, a small change that makes a big difference to the ergonomic profile when riding, offering increased comfort when riding over longer distances.

Perfectly poised, the new Suzuki Hayabusa features fully adjustable KYB suspension, which is optimised to eliminate oversteering at lower speeds while offering a stable, balanced ride at all speeds. The 43mm inverted KYB front forks feature a Diamond-Like Carbon coating for increased durability and styling, with a revised internal structure to help improve the absorption of the road’s surface. The new 7 spoke wheels look perfect on the new Hayabusa, with an added bonus of helping improve grip with the new Bridgestone S22 Hypersport tyres that cover them.

With a very powerful engine and a curb weight of 246kg, the new Suzuki Hayabusa needs some serious stopping power, supplied by the geniuses at Brembo brakes. The new Brembo Stylema calipers were first introduced as the anchors for the latest incarnation of the Ducati Panigale V4 range, making them the perfect brakes for helping bring your new Hayabusa to a controlled stop, gripping to new 320mm front brake discs. The Suzuki Hayabusa utilises a combined braking system, which uses the front brake lever to operate both the front and rear brakes for a more confident braking experience.

The silhouette of the Suzuki Hayabusa remains relatively unchanged, such as the falcon like front profile which now features LED lighting as standard. The headlights feature a stacked multi-LED headlight setup; the two upper and two lower LEDs for the low beam are mounted in the corners, where they shine across a reflector panel which fills the light assembly with a massive amount of light helping you illuminate even the darkest of roads. The LED’s extend to the position lights that sit aside the main headlight unit and change to indicators when the turn signal is operated, eliminating any need for protruding indicators on the outer body work.

LED lighting continues at the rear, with a centralised LED lighting cluster that showcases the running lights, brake lights and indicators in one neat area. As an additional safety measure, the new Suzuki Hayabusa showcases an Emergency Stop Signal, the first for a Suzuki motorcycle. When the brakes are applied firmly in an accident avoidance scenario when traveling over 35mph, both indicators flash in unison and act as hazard lights, warning other motorists around you.

For its latest generation, the new Suzuki Hayabusa features the most comprehensive electronics package ever, with features to help performance and rider comfort. The inclusion of the Suzuki Intelligent Ride System helps maximise your enjoyment aboard your new Hayabusa and features many adjustable modes to help you fine tune your machine. With selectable power modes, lift control and engine braking, the rider can customise the riding profile of their Hayabusa, storing them as one of the three user designed presets on the Suzuki Drive Mode Selector. The SDMS-a also features three preset options for Active, Basic and Comfort too.

Despite the high performance nature of the new Hayabusa, the bike features electronics to help increase the usability of the bike too. With the inclusion of a low RPM assist, hill hold control and an easy start system, riding a Hayabusa has never been easier which makes for a user friendly machine for those quieter days commuting. You’ll also find an electronically adjustable quickshifter and autoblipper for those sportier gear shifts when taking the long way home. A cruise control feature comes as standard, a blessing for long distance bikers that will really make the difference when travelling over many miles.

The new Suzuki Hayabusa also showcases something that has never been seen before in the motorcycle industry; an active speed limiter. Designed to help reduce the risks of getting carried away or being caught speeding, the speed limiter can be easily set for UK road limits. It can also be unlocked easily too for a bit of Autobahn speed seeking when the situation calls for it.

All the changes made on your new Hayabusa are illustrated on the bike’s TFT LCD dashboard display, which also showcases your lean angle, brake lever pressure and throttle position too, ensuring you’re completely informed when aboard the new Hayabusa. This TFT dash is backed up with a traditional analogue clock configuration, which shows your speed and rev counter, as well as engine temperature and fuel reading and makes for the perfect blend of the past and the present.

Please note: Some images show this Suzuki Hayabusa with a colour matched race seat converter; this is available to purchase separately as part of the range of Suzuki Genuine Accessories for the new Suzuki Hayabusa.


Terms and conditions apply. Representative example with Black Horse Finance. Actual figures will vary depending on the deposit, duration and value of vehicle finance. These figures are based on O.T.R. (on the road) prices including 1 year's road tax and first registration fee.

We also offer finance on genuine Suzuki accessories. Please contact us for details.

* No minimum deposit required. You can choose a deposit amount to suit you. Monthly payments will vary as a result. Credit is subject to status, 18+, UK residents only. This PCP finance offer is available through Suzuki Finance, a trading style of Suzuki Financial Services Limited, St. William House, Tresillian Terrace, Cardiff, CF10 5BH. This offer is at a lower rate than our standard terms. This promotion ends on 30th June 2022.


Terms and conditions apply. Representative example with Black Horse Finance. Actual figures will vary depending on the deposit, duration and value of vehicle finance. These figures are based on O.T.R. (on the road) prices including 1 year's road tax and first registration fee.

We also offer finance on genuine Suzuki accessories. Please contact us for details.

* No minimum deposit required. You can choose a deposit amount to suit you. Monthly payments will vary as a result. Credit is subject to status, 18+, UK residents only. This HP finance offer is available through Suzuki Finance, a trading style of Suzuki Financial Services Limited, St. William House, Tresillian Terrace, Cardiff, CF10 5BH. This offer is at a lower rate than our standard terms. This promotion ends on 30th June 2022.

All new Suzuki motorcycles and scooters registered in 2021 in the UK benefit from a three year warranty (parts and labour) with unlimited mileage.

Free UK delivery does not apply to this product.

We offer nationwide delivery on all new Suzuki bikes, wherever you live in the UK.

Prices vary depending on your delivery address.