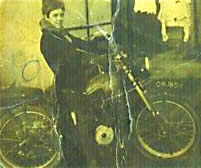 My name is Pete Scott, the Managing Director of Two Wheel Centre. I first became interested in motorcycles at the age of 9, as you can see from the old photo to the right.

At 16 years of age I started work as a trainee mechanic at Copes, a local motorcycle shop in Mansfield located on Albert Street. After only a short period of time I decided to try my hand at Welbeck colliery working as an apprentice fitter. I stayed there for two years but eventually realised that I was happiest working with motorcycles.

At the age of 19, I continued my career in the motorcycle trade by working at Richardson's Motorcycles in Mansfield on Belverdere Street (situated near the Railway Station). In the beginning I worked mainly on British bikes and Italian scooters (Vespa and Lambretta).

I have many fond memories of my time at Richardson's. I rode and worked on the first Suzuki superbike, the 750GT kettle, a three cylinder, liquid cooled 2 stroke voted MCN machine of the year in 1974. It was around this time that the business moved to Rosemary Street. In 1979 I was promoted to Workshop Manager and Chief Technician. From then until 1984 I worked in this capacity mainly on Japanese machines as they gained popularity. I remember the Suzuki representative bringing a pre-production GSX250 twin, the first four stroke we had seen of its kind!

The premises that were once Richardson's became a video rental store called Choices until 2007. After that time and up to the time of writing, the ex-Richo's (as it was locally known) premises are unused. 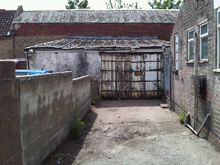 In 1985 I made the decision to become self-employed obviously still working in the motorcycle industry and in 1988 established premises in Mansfield Woodhouse. In 1989 'Two Wheel' was created as a partnership with another former employee of Richardson's. As a former storeman he ran the parts side of the business and I prepared, serviced and sold bikes. These were turbulent times, interest rates were very high and we traded in overdraft doing the best we could. In 1991 my brother Steve came to work for us in the workshop.

We traded from 15-15a Station Street and had our workshop facilities on Vale Road, Mansfield Woodhouse. Renting three premises in these hard times wasn't viable so in 1992 the partnership was dissolved. At this point I made the decision to trade on my own. Steve came with me and we worked to the best of our ability. Starting from scratch again with little or no stock we worked long and hard to build up the business. Reinvesting helped the business to grow and soon we had such a good customer base that the premises became too small.

The decision was made that to be able to continue to provide the kind of service we pride ourselves on, bigger and better premises were required. In July 1997 we moved to Anvil Garage, Warsop Road, Mansfield Woodhouse. This enabled the stock of bikes to be increased from 25 to 60, including our then new Peugeot franchise. Added to this, more parts, clothes and accessories meant an increase in staff to 5 people. Due to very hard work and dedicated staff we were only at Anvil Garage for 5 years before it became evident we had outgrown the premises. 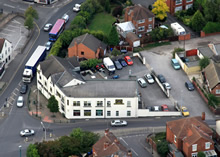 I then started looking for somewhere to move the business to, not realising when I first set out that I had been passing our new premises for many years. In October 2002 I signed for Priory Works, our new premises, and work began to convert the building to suit the needs of the expanding business. Many months of hard work, late nights and early mornings followed. With help from staff and friends alike the building has been transformed into what you see today.

We opened on 1st February 2003 and the business continues to go from strength to strength. There are now 16 of us working together to keep our standards of service second to none. Since December 2003 we have had our MOT facilities in full operation.

This is our latest addition, a complete ecommerce web site!

We pride ourselves here at Two Wheel Centre on giving our customers the best possible standard of care and service. If you are happy, we are happy!

Thank you for visiting our web site. I hope you find it easy to use and informative. If you do have any queries or comments then please telephone or e-mail us here at Two Wheel Centre. 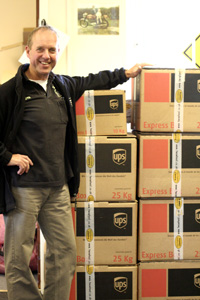