After a bit of questionable qualifying involving Marquez and Iannone, Marc is pushed back down the grid at Sepang, starting in 7th place. Meanwhile, the high speed crash in Philip Island hasn’t knocked Johan Zarco’s confidence. The Frenchman sits on pole position, joined by Rossi and Iannone to complete the front row.

Great starts from Rossi and Zarco put the Yamaha’s at the front of the pack. Decent starts from Dovi and Miller mean they are soon hunting down the Doctor. Marquez is pulling his usual spoilt brat tactics when he’s not on pole and barges his Repsol Honda teammate out of the way and forcing Dani Pedrosa up out of his line.

Marquez seems to have a brief wobble at turn 15 but manages to rescue it. In a effort to stop himself running into the back of Marquez, Iannone rolls off the power and ditches the Suzuki, a real shame for the Maniac who had shown such promise through qualifying. Can’t switch off instinct though! 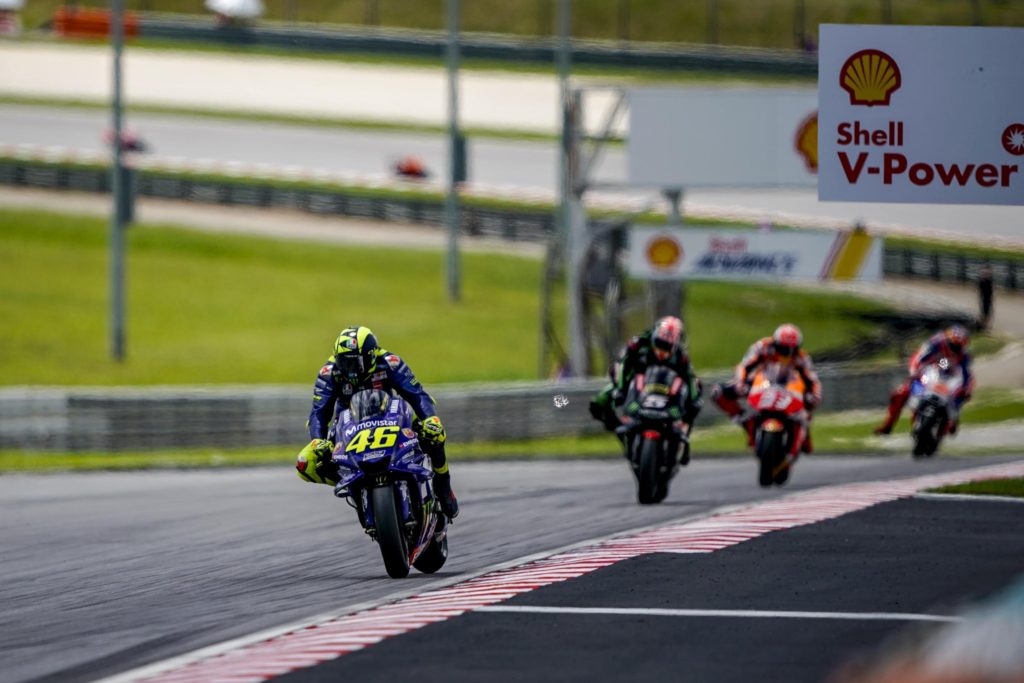 Marquez is putting in the fastest laps of the race and is making headway on the Yamaha’s in front of him, sitting in third for now. A great ride from Dani Pedrosa who, in the penultimate race of his career, sits comfortable in 6th position behind the Ducati’s of Dovi and Miller. Despite a troubled start to the race, Maverick Vinales is creeping his way up the field once more, and after his Philip Island win last week, Mr Vinales is not one to rule out.

Johan Zarco runs wide into the final corner and is pushed even wider by Marc Marquez, forcing the Frenchman further out and stealing second place. Valentino Rossi looks cool and comfortable at the front of the pack. Marquez is marginally quicker here at Sepang and Rossi will have to watch out if he has any hope of keeping Marquez at bay at the MotoGP Malaysia. 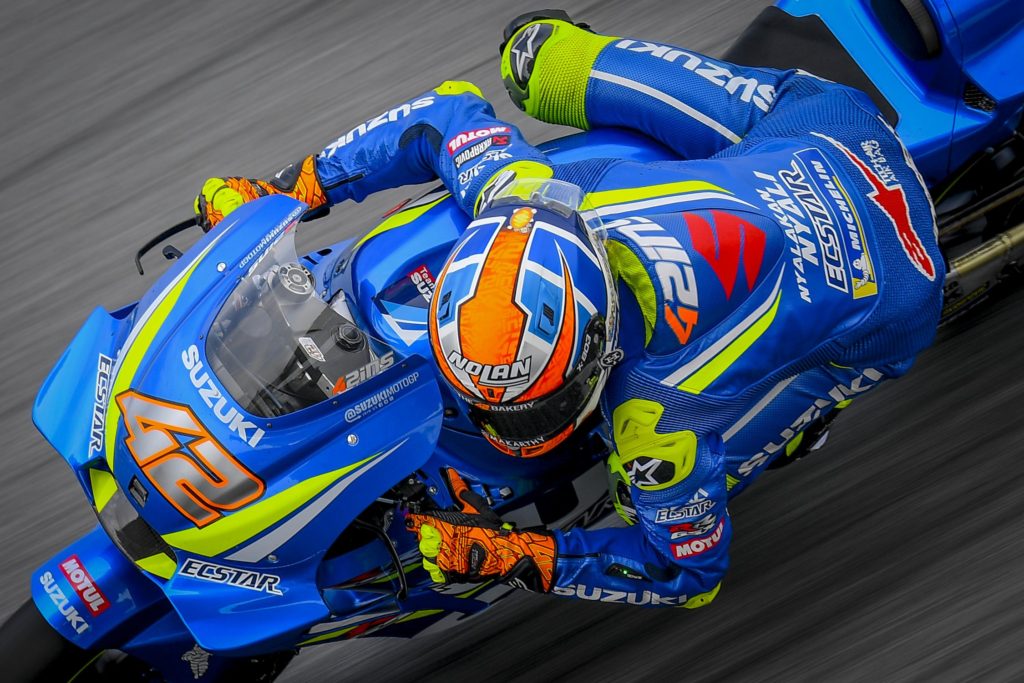 Despite his teammate slipping away unexpectedly, Alex Rins is putting in some fast laps and making his way to the front of the field on the Suzuki! Rins forces his way up on Dovi and into 5th place behind Dani Pedrosa. Rins is on fire here at Sepang, just like his bike was during practice this weekend. Reports say fuel dripping on a red-hot exhaust set Alex Rin’s Suzuki GSX-RR on fire in the pitlane. Not the ideal start to this weekend at the MotoGP Malaysia but Alex Rins doesn’t seem to mind!

Rossi is putting in some very fast laps on the Yamaha at the front of the pack. The Doctor has chosen a soft rear tyre for this race in an effort to combat the grip issues that have plagued the Yamaha bikes all season. However, all the grip that was present in the beginning of the race that is serving him well will soon be deteriorating. Either way, pulling ahead of the pack and staying a full second clear of Marquez in second place is no easy feat at the MotoGP Malaysia. 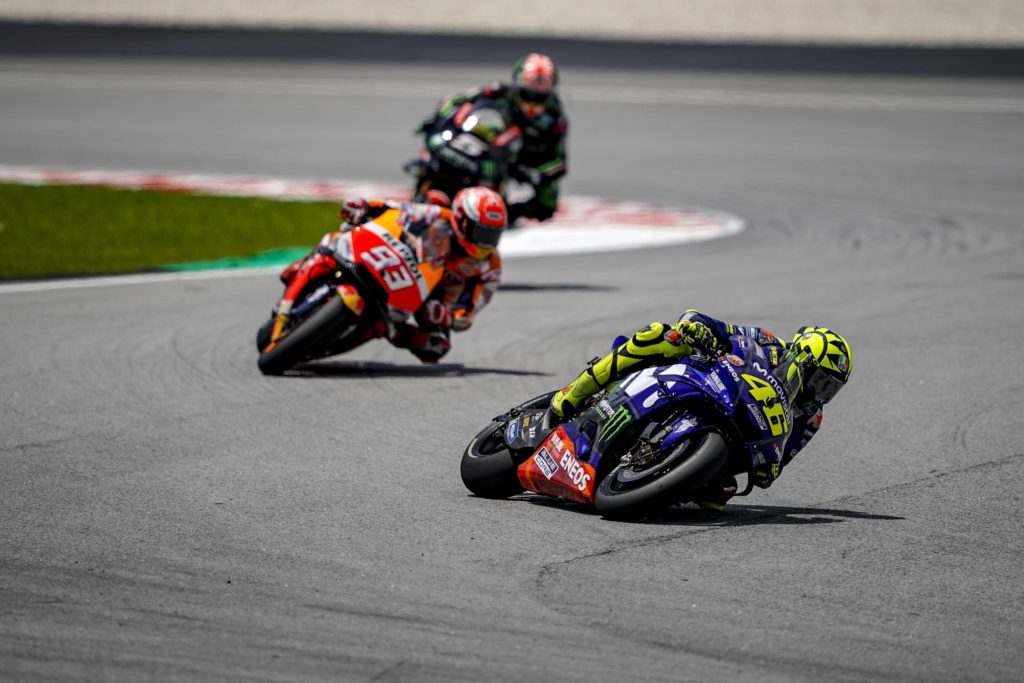 9 laps left in the race and Alex Rins slides underneath Dani Pedrosa to claim 4th position. Rossi is still leading the pack with Marquez behind the Doctor. Johann Zarco might well be in third place but there’s little chance of him being able to move further up the field. This track doesn’t seem to be favouring the Ducati’s at all; Ducati’s top man, Andrea Dovizioso, is sitting in 7th place and hasn’t seemed to make much of a challenge to any rider here.

Marquez is getting some warning from his front tyre, with some wobbling as a sign of grip running out. Marc is ignoring these warnings and pushing harder and harder, making up the time on the braking into each corner. 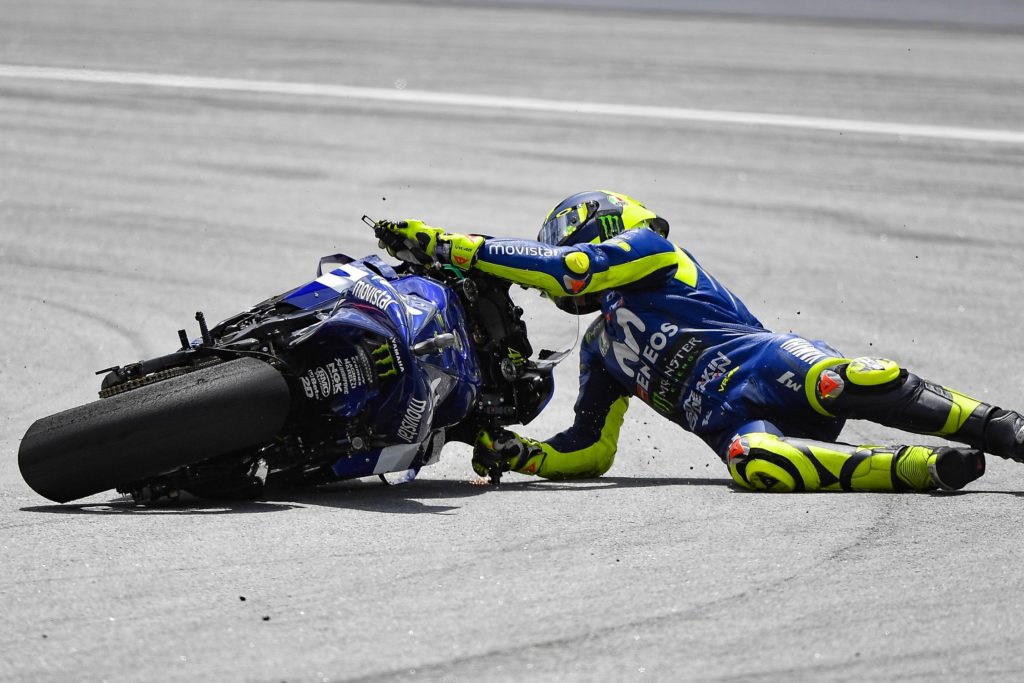 Rossi and Marquez are still battling with just 5 laps to go. It’s fantastic to see Yamaha battling away with the Honda’s at the front of the field once more. But the dream of a Valentino victory comes to an end. With 4 laps left in the race, the grip runs out on the Doctor and his Yamaha meets the tarmac. A real shame considering Rossi has led since the first corner of the race. He does rejoin the race, but sitting in 18th place is hardly a fitting finish for the Doctor after such a great race.

Now unchallenged and with a healthy cushion of time, Marc Marquez can quietly cruise to a victory. Zarco still sits in second but he’s being hunted down by Alex Rins on the Suzuki! On the last lap of the race, Alex Rins pulls the trigger and steals second position. As the Repsol Honda crosses the line, Marc Marquez takes his 70th career win and is joined on the podium by Alex Rins and Johan Zarco.