As the racers line up at the MotoGP here in beautiful Japan, the eyes are on Marc Marquez, who looks set to take another championship here at his team’s home race. Strangely, he starts back in 6th position behind title rival Dovi, Zarco, Miller, Crutchlow and Iannone. Being further back down the grid never usually bothers Marc though, often grabbing the holeshot and holding on tight.

After a little paint trading between Zarco and Miller, Dovi ultimately becomes the holeshot hero in Japan, followed eagerly by Jack Miller and Marc Marquez. Marc certainly isn’t hanging around with a nice pass on Miller and up into 2nd position. Seems uncharacteristic of Marc to take a position from someone without sitting them up out of their line; first time for everything I guess.

Marquez is trying to close the gap on Dovi, taking an inch with each corner. Meanwhile Crutchlow is pushing further up the field and is currently breathing down the neck of Jack Miller in 3rd position. Crutchlow has just set the fastest lap of the race so far and won’t hang around for long. He quietly sneaks it up the inside of Miller and makes it stick, snatching 3rd from his Australian rival. 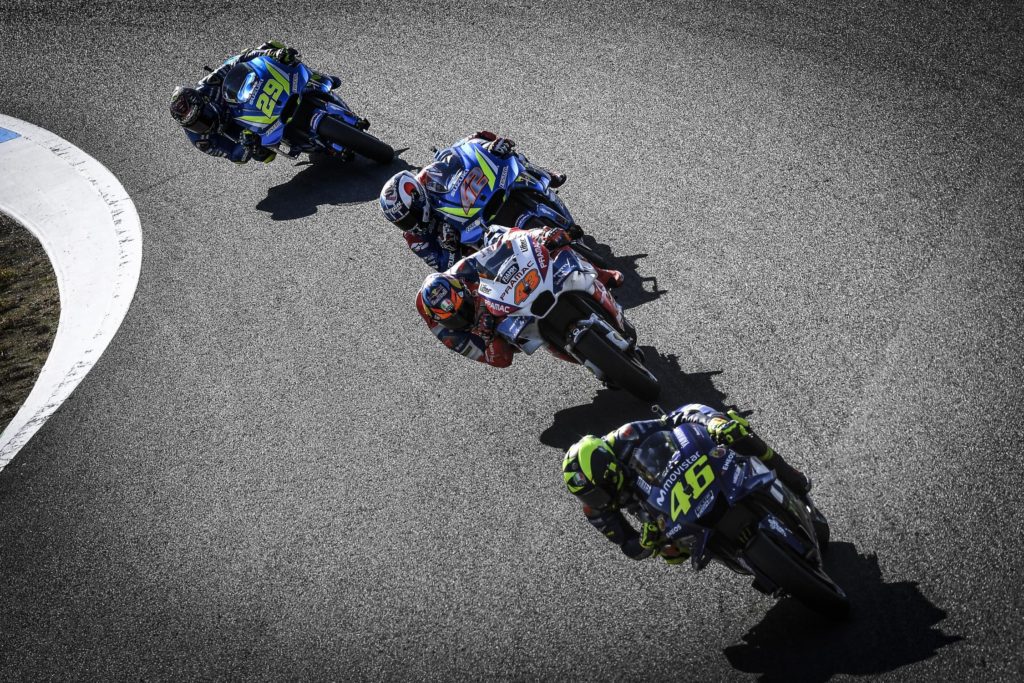 Despite having started second on the grid, Johan Zarco has dropped way back to 7th, currently sandwiched between the Suzuki’s of Alex Rins and Andrea Iannone. Alex Rins has made considerable improvements this season. I remember him ending up in the gravel many times at the start of the season and he’s now challenging the top six in many races. Fair play Mr Rins!

As Dovi runs wide into turn 3, Marc closes the gap on his Italian rival but doesn’t yet have the speed to try and make anything stick. It’s not long before Cal Crutchlow sneaks in a beautiful pass on Marc Marquez and snatches 2nd position! Ducati might well be leading the race but the Honda’s are on song here at the MotoGP Japan!

Rossi slides out of the slipstream behind Jack Miller and sneaks into 4th place, a great move by the Doctor. Tyre pressure errors in qualifying meant Valentino has to start way back down the grid but he vowed to challenge for a podium and that’s just what he’s doing.

After having dropped the pace off at the front of the pack, Dovi suddenly sets the fastest lap of the race so far. Marquez realizes he can’t wait any longer with Dovi picking up the pace again and launches past Crutchlow and into 2nd place. Rossi can’t match the pace of the front three so sits peacefully in fourth.

Iannone and Rins have since moved up on Rossi, sitting in 4th and 5th positions respectively. Can the two Suzuki’s keep on pushing and challenge for the podium? At turn 9, Jack Miller unfortunately crashes out of the race, a real shame for Jack. Here’s to hoping he does better at his home race in Australia next time out. 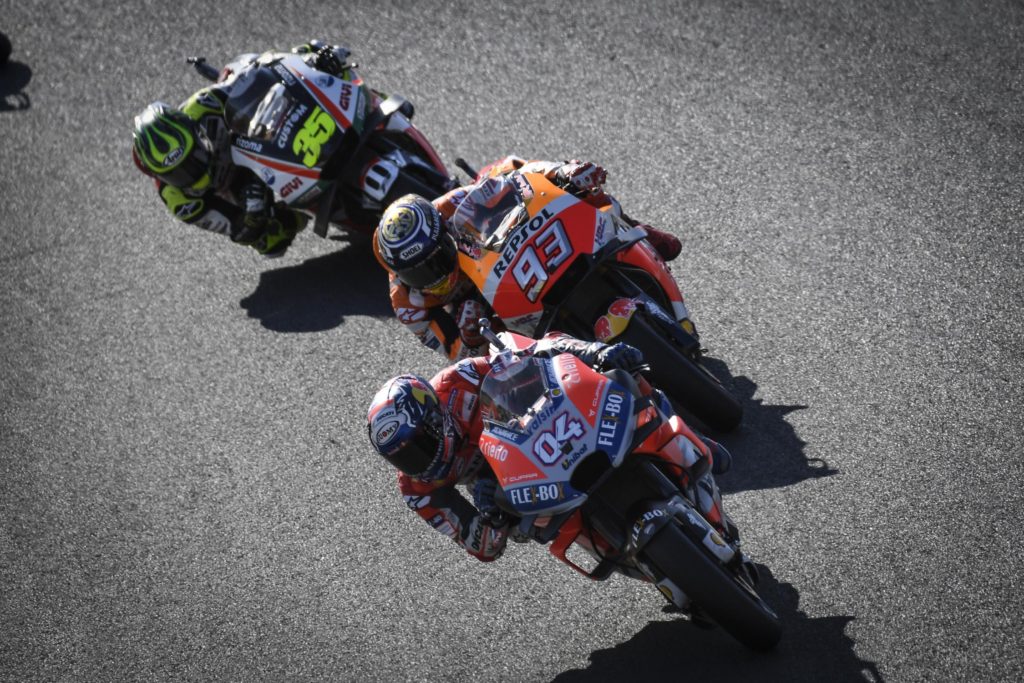 Meanwhile, at front of the pack, Dovi still leads the field followed eagerly by Marquez and Crutchlow. A fantastic ride from Crutchlow so far, letting his riding talk for him after WSBK rider Jonathon Rea claims he could do better on the MotoGP field. Dovi is doing very well on the factory Ducati, holding well without resistance from his Ducati teammate Jorge Lorenzo who has chosen not to participate after injuries he sustained in a previous outing.

With 11 laps left in the race, Dovi runs wide and Marc Marquez seizes the moment to grab 1st position with a well-executed pass. Dovi tries to retaliate immediately, attempting to use the power of the Ducati to challenge for the lead once more. Marquez finds the grass as he takes a wide line while attempting to accelerate away, spraying Dovi and Crutchlow with a face full of dirt. This mistake lets Dovi steal the inside line away from Marc and the Italian claims first place once more.

The little scrap between the top three has allowed for the Suzuki’s to close the gap, still sitting in fourth and fifth but moving ever closer. Oh wait, I spoke too soon. Iannone has chucked it into the gravel. Looks like Rins is going it alone for the Suzuki team for the rest of the MotoGP Japan. 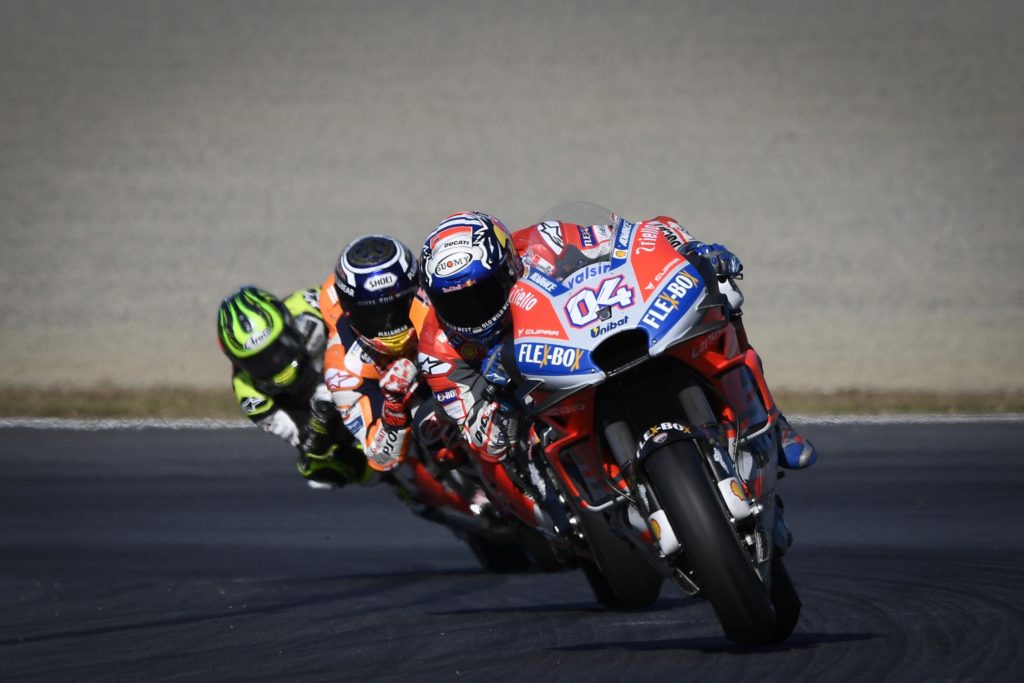 The gap between Crutchlow and Marquez has been getting wider and wider, and Cal is now having to keep Alex Rins at bay. At this stage of the race, fuel and tyres become a deciding factor and with Dovi running a soft front tyre, will this be his undoing at the later stages of the race? He’s still setting the fastest lap on the race, so clearly grip isn’t too much of an issue just yet!

4 laps to go, Dovi runs wide and leaves the door open for Marc Marquez to dive in. Dovi just isn’t quick enough to take it back and Marquez begins to make a run for it. Dovi isn’t giving in and is sticking onto Marc rear wheel. The lone factory Ducati rider isn’t going to give this one up without a fight.

As turn 10 approaches on the penultimate lap, both Dovi’s luck and grip run out. A gentle slide as the tyres give up slides the Italian into the dust. He does remount the bike but the damage is already done. Marquez doesn’t know it yet but he’s now the 2018 MotoGP Champion!

As Marc rounds the final straight and sees his pitboard with ‘DOVI OUT’, Marquez knows he’s the champ. With a very large gap between Marquez and Crutchlow, there is no one to contest this victory. Let the celebrations begin! A brilliant ride from both Cal Crutchlow and Alex Rins who land on the podium with Marc, finishing second and third respectively. 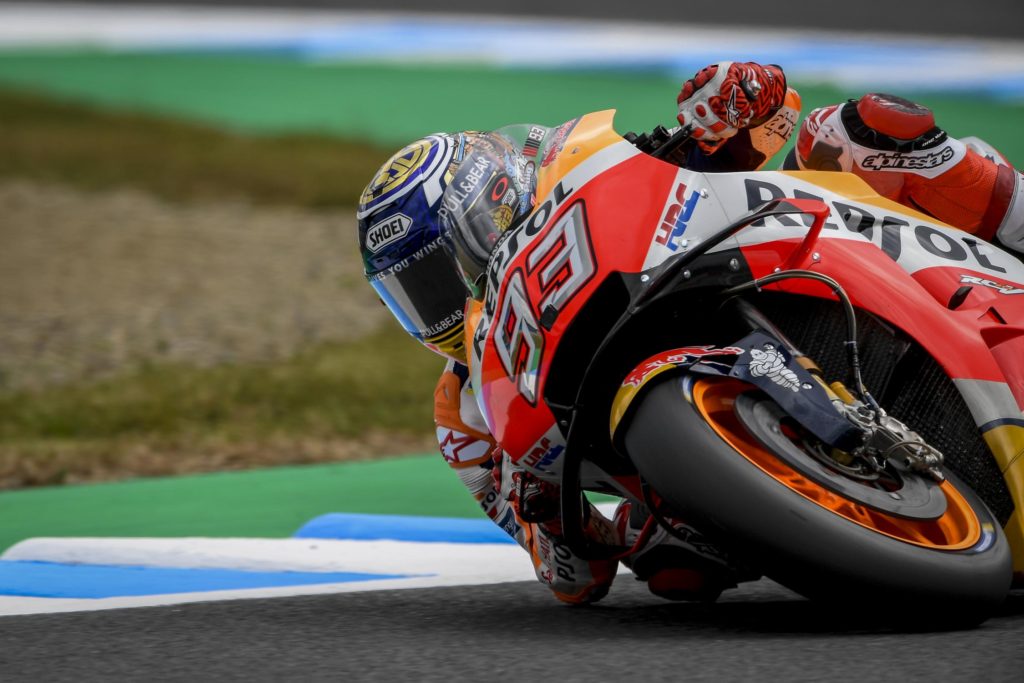 During the celebration at the side of the track, Scott Redding pulls in to congratulate Marc, giving him a real good slap on the shoulder. Later reports show the big back slap from Redding temporarily dislocated Marc Marquez’s shoulder! Laying on the trackside, his brother and team pop his shoulder back into place and the celebrations can really begin.

Approaching an oversized arcade machine, Marquez plays a brief retro styled motorcycle racing game before being proclaimed the victor and collecting his championship Shoei helmet, with gold leafing to boot. A well-deserved victory for Marc! Undoubtedly, this will fill him full of confidence for the next round in Australia. Can he win the next race at Philip Island? Tune in soon to find out! 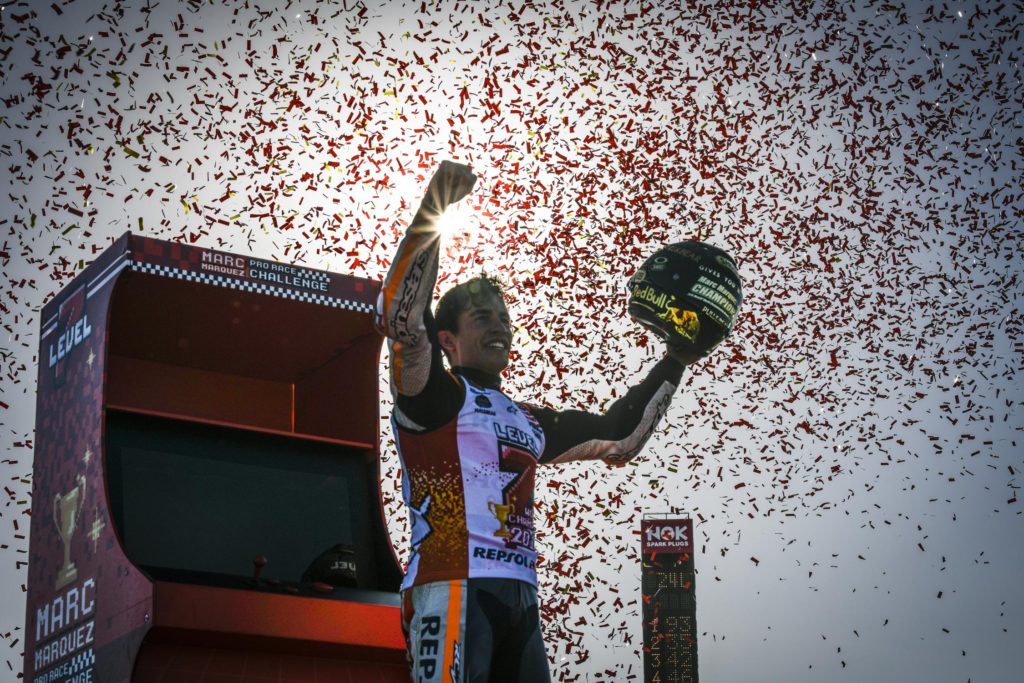 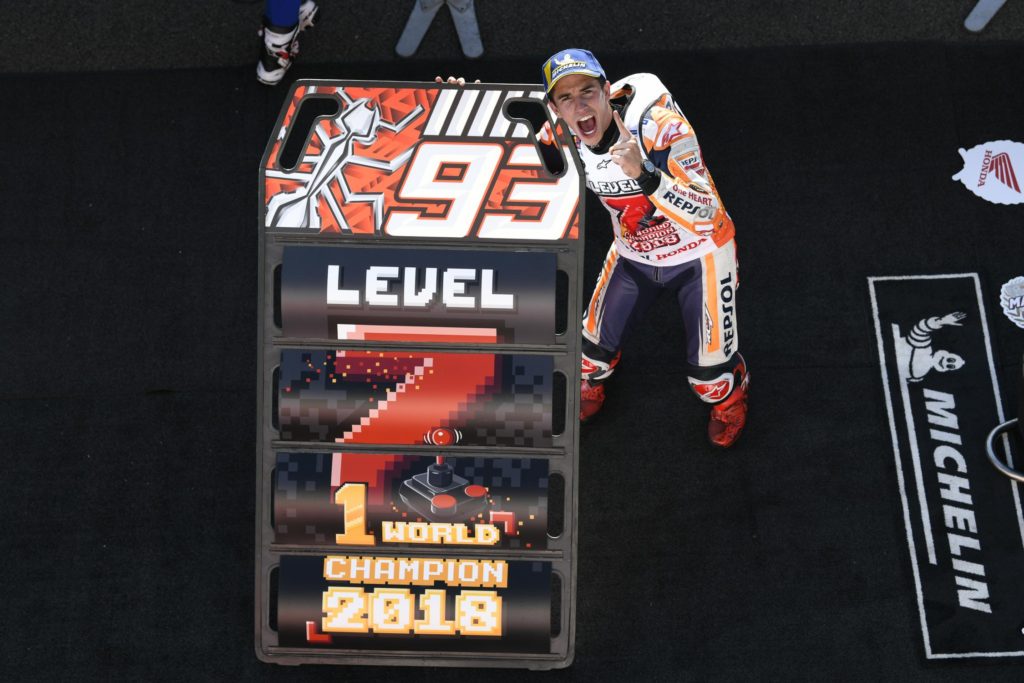 All images courtesy of motogp.com