MCE Insurance BSB Season 2015: Shane ‘Shakey’ Byrne and Dan ‘Linny’ Linfoot kept the crowds, and each other, excited for the start of this year’s British Superbike Championship

“Here we go again! Having the most successful team and rider in the history of the series means we are very much the ones to beat but it’s not going to be easy.”

Confident words from the Paul Bird (PB) Kawasaki racing team’s owner, Paul Bird, as he anticipated the start of the MCE Insurance BSB 2015 season. Confident but not cocky – he knew having last year’s MCE Insurance BSB victor Shane ‘Shakey’ Byrne on the books, with quadruple titles to defend and a recent Torrens trophy win, has set the team up with a strong starting position. But competition is fiercer than Shakey’s winning attitude and he knows it.

This weekend proved PB’s point – their team were very much the ones to beat, but the wins were no easy feat. Tens of thousands of fans flocked to Donington Park for the MCE Insurance BSB season opener, which saw PB’s James Ellison winning race number one ahead of his team-mate Shakey. Maybe he was taking it steady in anticipation of race two, as this time round Shakey bagged the top podium position. Although only literally, by a split second (0.598 seconds). Linny, Shakey, Linny… the incredibly close fight for the win went on as Honda’s Dan Linny Linfoot challenged Shakey to a constant game of cat and mouse. It was a close call but Linny just slipped behind, placing in at a near-second. 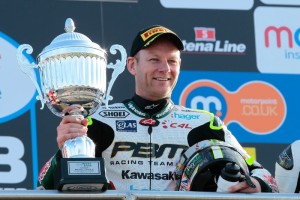 It was a close but necessary win as Shakey proved he was serious about retaining his title for a second year “Finishing second is not what I am here to do.”

Linfoot accepted defeat graciously and is far from throwing in the towel “now it is onwards and upwards.” Keen to see his name overtake Shakey’s on the standings, the close call must have instilled some confidence and left him hungrier than before for a MCE Insurance BSB win.

Japanese contender Kiyonari is also one to watch out for, he crashed out early in the second race, taking a fall in lap 6, but this has only riled him up for next time, “I have confidence ahead of Brands Hatch and I will try to win.”

The start of the season was a perfect cure for the off-season blues and PB Kawasaki have shown they are a force to be reckoned with. But will this confidence turn to complacency? Can they keep up the pace at Brand’s Hatch? Will Kiyonari’s determination place him on the podium? There’s only two weeks until we find out…

Laura is a seasoned blogger and excited to put her writing skills to the test at Two Wheel. She’s ridden a scooter in South Korea and India and is keen to test her mettle with a full license one day. When not dreaming of her next big travel adventure she’s usually out running or snapping away on her DSLR.

5 thoughts on “MCE Insurance BSB 2015: A win for champion Shane Shakey Byrne, will it continue?”