Thai GP – Yamaha on the up, Lorenzo MIA and a last lap battle to remember!

Who will claim the virgin victory at the Thai GP? With Yamaha finally having found somewhat of a solution to their troubled season so far, could a Yamaha be victorious here at the Thai GP? With Rossi lining up 2nd on the grid and his teammate Vinales in 4th position, they could very well end Yamaha’s winless year so far. But with Marquez sitting in pole position and Dovi third on the grid, it’s not going to be quite that simple. With no Jorge Lorenzo this time around thanks to a last round crash along with a massive highside in practice, there’s one less contender for the top spot here in Thailand. 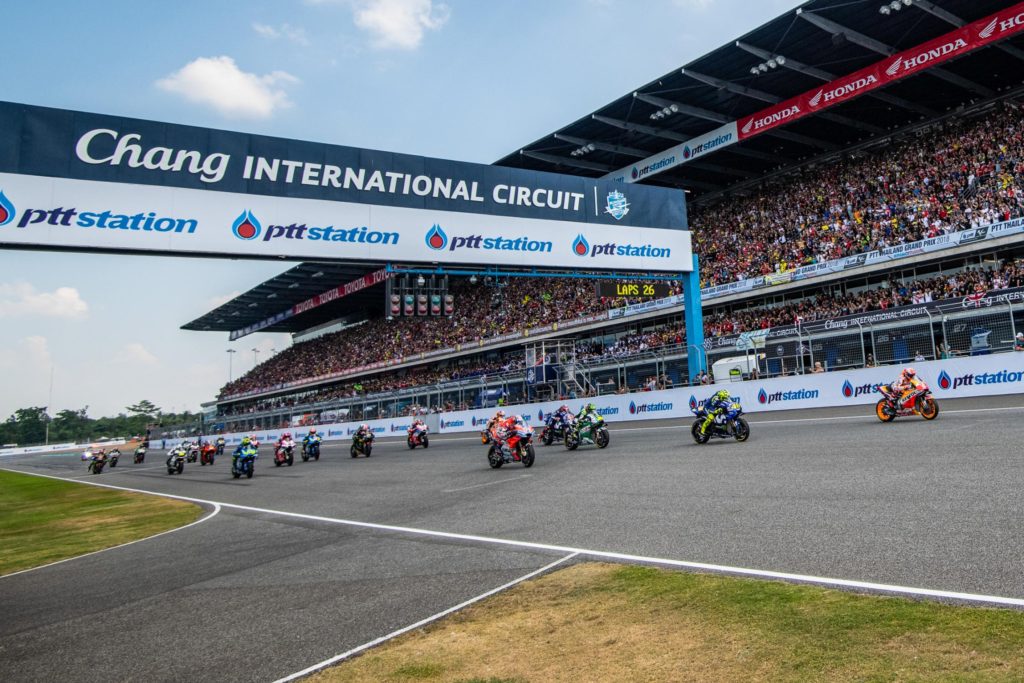 As the race gets underway, Marquez immediately seizes the lead but Rossi and Dovi aren’t too far behind. Cal Crutchlow has also made a decent start sitting comfortably behind Dovi in 4th position. It’s great to see Rossi and Vinales back as contenders again; must be something to do with the new fairings on the Yamaha’s for this race. Even Zarco, who has been struggling somewhat after a cracking start to the season is in the top six.

Marc Marquez has set the fastest lap of the race so far but can’t quite put enough tarmac between him and Rossi as he’d probably like. It’s not long before Rossi uses the slipstream behind the Repsol Honda and steals the lead. It’s been quite a while since the Doctor led the pack. Dovi seems to have capitalised too, slipping under Marquez to squeeze Marc out of second place. Marquez’s pace has dropped off a bit since the beginning of the race, but I reckon he’s playing mind games.

Jack Miller sits 7th behind Zarco, followed eagerly by Alex Rin’s on the Suzuki. Despite a good grid position for the start of the race, it seems Rin’s Suzuki teammate Andrea Iannone has made a miscalculation of some sort and landed back in 11th place. Dani Pedrosa lost ground at the first corner after being forced wide and hasn’t been able to fully recover, biding his time in 9th position. 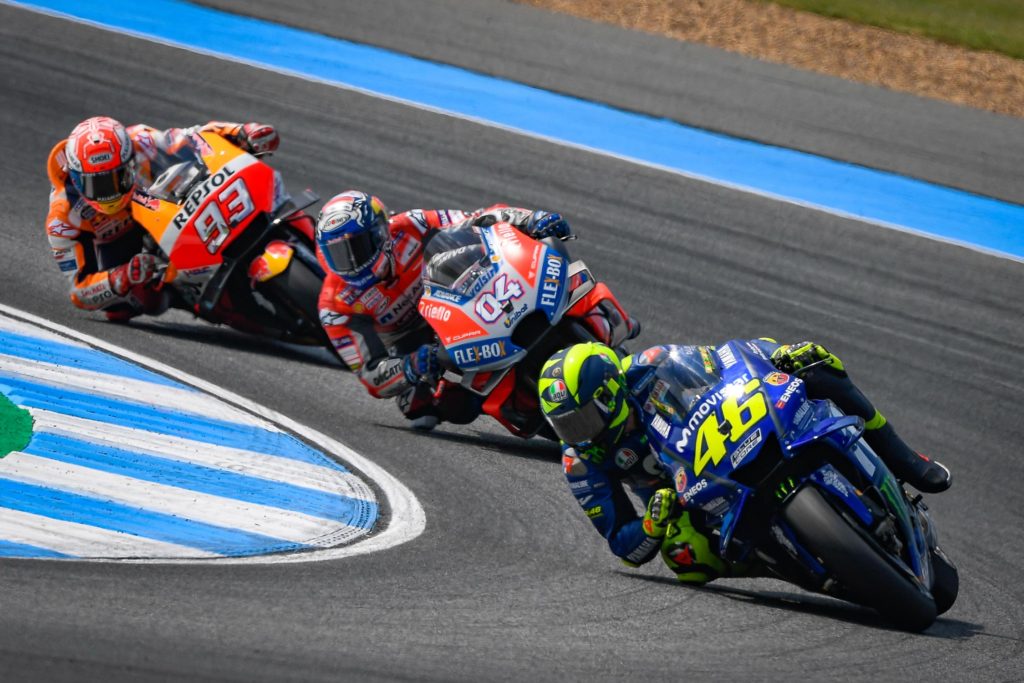 Rossi is still keeping Dovi and Marquez at bay, even though the Ducati and Honda behind him have been slightly quicker so far. Dovi and Marquez are more than likely waiting for the grip to run out on Rossi before making their move. Vinales seems to have become more comfortable with the bike now, setting faster lap times and making up ground on Cal Crutchlow, who is having a cracking ride on the LCR Honda in 4th.

Round the first corner off the straight, Rossi loses grip at the rear with a slight wheelspin and gets instantly swallowed up by Dovi and Marquez, pushing the Doctor from 1st to 3rd in one move. Has Rossi lost the grip in rear tyre so soon? With 16 laps to go, it’s difficult to tell whether he’ll be able to make his way back to the front again at the Thai GP.

With 15 laps to go, there’s no clear cut winner yet. In fact there’s six bikes chasing for the lead. This does make it more exciting than the usual ‘Marquez clears off’ kind of races. Crutchlow is chasing down Rossi, looking to make a move. Zarco tries to make a move on Rins for 6th place but runs wide and has to drop to 8th behind Dani Pedrosa.

Marc Marquez seems to be biding his time behind Dovi, not moving from the rear of the Ducati but not looking at making moves. With 10 laps to go there’s still plenty of time for a change of position. Rossi is holding tight in 3rd but for how much longer? Pedrosa sneaks in on Rins and steal 6th place, followed by another jump past Crutchlow into 5th. What a ride from Dani! 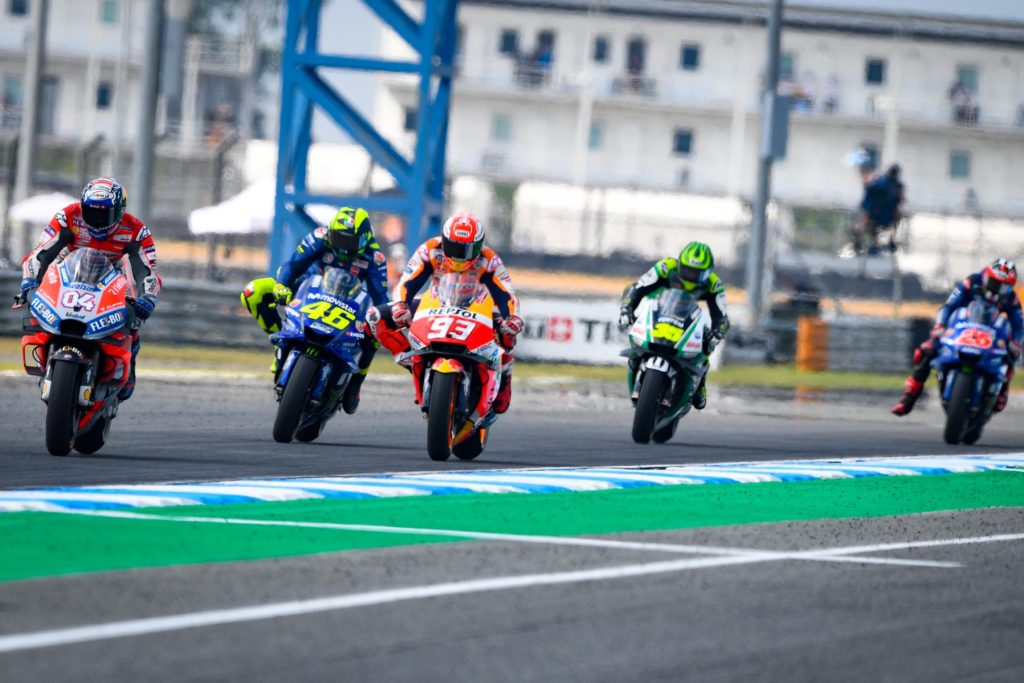 Crutchlow has been swallowed up by Rins now, dropping to 7th position. Cal must be running out of grip, after having lost so many places in such a short amount of time. With 8 laps to go, it appears that I spoke too soon; Dani Pedrosa is down and his Honda is in the gravel. A real shame to Dani, who’d been having such a good ride at the Thai GP.

Rossi’s early efforts at the front of the pack have cost him his grip. His teammate has seized the opportunity at Vinales pinches third position. Can Vinales end the Yamaha losing streak in their worst season in years?

Dovi still leads the Thai GP, but Marquez refuses to let him get away. With 5 laps to go, he needs to pull the pin soon if he wants to add another victory to his CV. He does make a challenge but runs wide, as Dovi sails through and Vinales closes the gap further. He doesn’t let Dovi get too far ahead though and immediately begins lining up his next move. 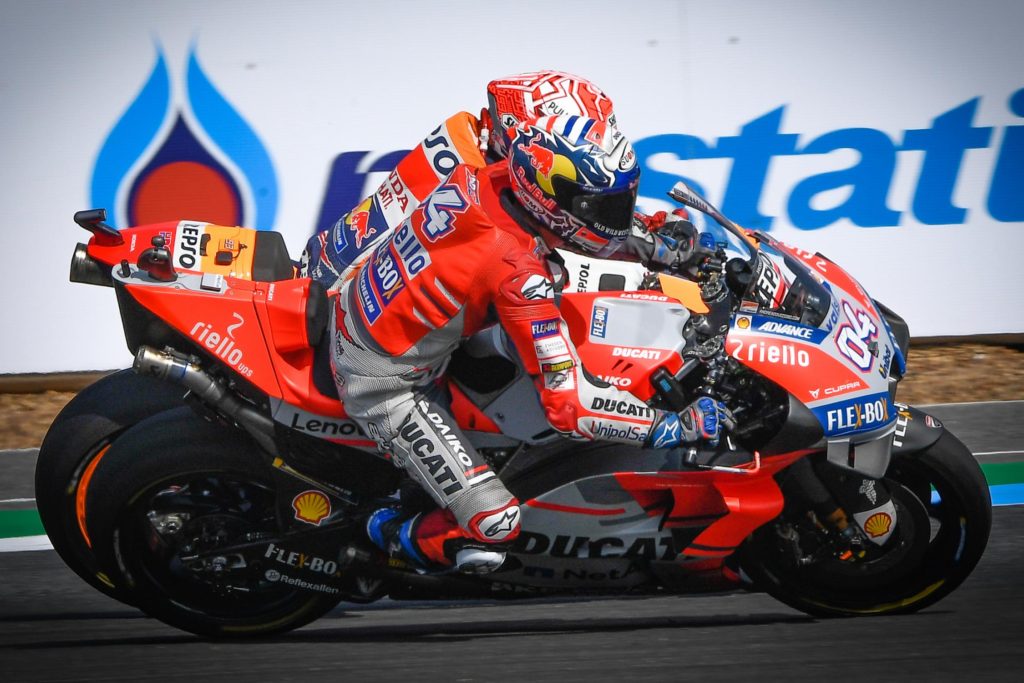 It’s not long before Marquez tries again, sweeping up the inside of Dovi but Dovi responds immediately and steals his position back. Again Marquez makes a pass only to have it taken away all too soon. Classic Marquez and Dovi! All the while, Vinales is looking for opportunities of his own, edging ever closer to 2nd position.

With two laps to go, Marquez changes his line to grab the inside on Dovi. Dovi can’t quite slide back on Marc and it appears that the Repsol Honda will secure a win here at the Thai GP. But the Ducati man won’t back down and steals it back again! Racing right til the last lap! A proper showdown at the MotoGP and I love it! Turn 5 sees Marc snatch it back and shuts the door on Dovi into turn 6. Vinales and Rossi are right behind the Ducati but do they have enough grip and speed to capitalise on the last lap? 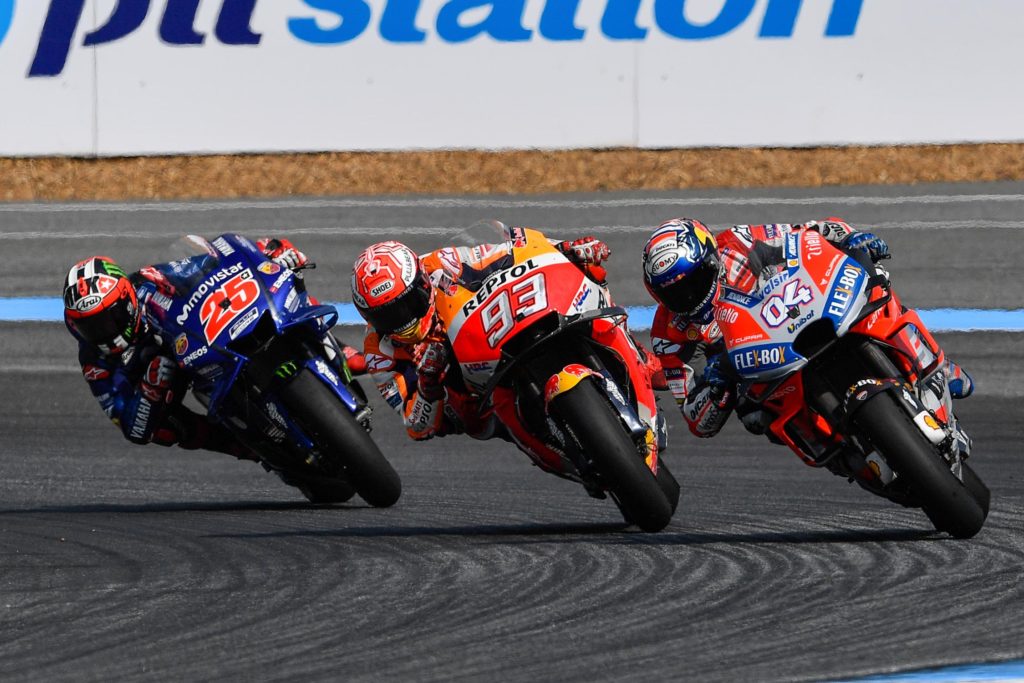 Dovi makes a last corner effort to push Marc wide but ultimately ends up running wide himself. It’s a Marc Marquez victory but only just! Only a tenth of a second separates Honda and Ducati but a hard fought battle must have a winner and at the Thai GP, that man is Marc Marquez. It must be said though, Yamaha have made a strong comeback, as Vinales, Rossi and Zarco finish in 3rd, 4th and 5th positions. The more contenders for the title, the better! With the next round in Japan, will a Japanese manufacturer take the top spot or will the Italian bikes be king? Find out soon! 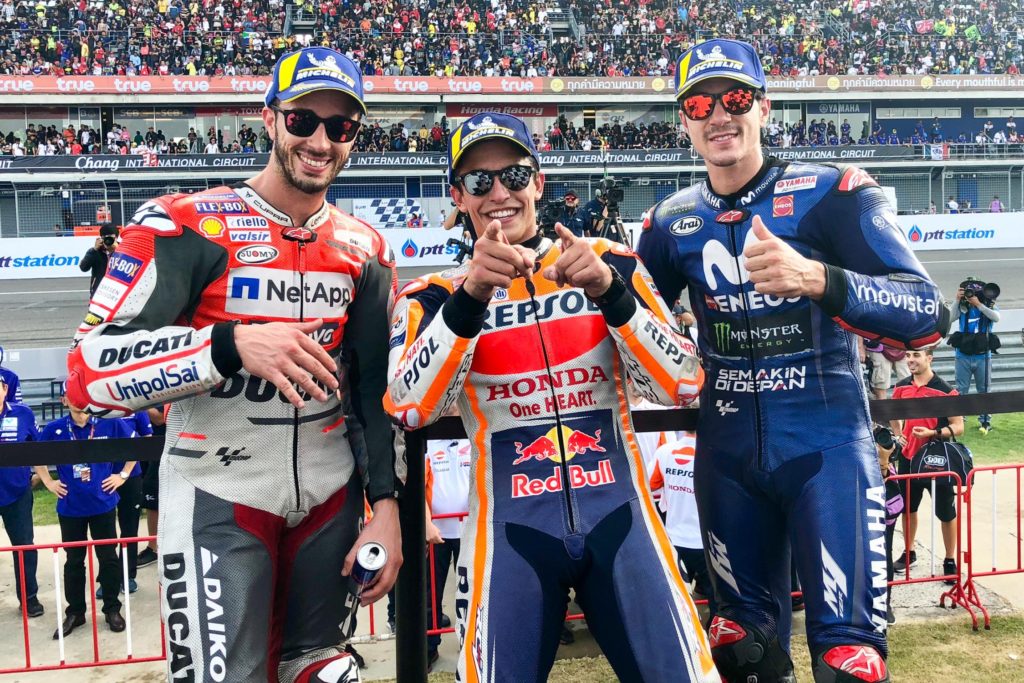