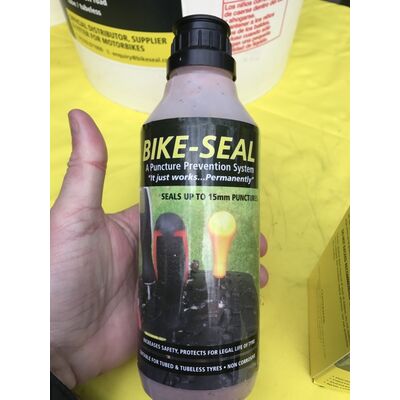 Bike Seal was originally developed back in the early 1960’s for NASA with the intention of protecting their spacesuits, which it was very successful at. Since then, the BikeSeal formula has been used in a variety of applications, most notably with the NATO forces in overseas conflicts such as Iraq and Afghanistan to help protect the tyres of military vehicles from puncture.

Bike Seal works in a unique way to protect your motorcycle tyres and the wheels too. Many motorcycle puncture prevention fluids utilise a chemical reaction to assist with the plugging of your motorcycle tyres. These chemicals can be detrimental to your wheel rims, causing corrosion and pitting, which can end up costing you a new wheel in the long run, something that will undoubtedly set you back a significant amount!

Additionally, some puncture prevention options can harden over time, especially when stored over longer periods such as in the winter. No one wants to find that their motorcycle tyres have become unbalanced during the winter period when they come to their first springtime ride!

Bike Seal works in a ‘mechanical’ way; as the tyre is rotating, the BikeSeal within the tyre spreads evenly, coating the interior of the tyre. When an item is picked up in your tyre that causes a puncture, the air pressure within the tyre causes the super strong synthetic fibres to rush to the puncture site, plugging the hole. The liquid contains filler particles which interlock between the synthetic fibres and create an airtight seal. This usually happens so fast that the rider is unaware that a puncture has even occurred!

Bike Seal uses a unique combination of liquid and fibres within your tyre to plug the puncture almost instantly. The liquid is water based and combined with a pH neutraliser and Propylene Glycol, which means there are no harsh chemicals to degrade the tyre or your wheel rims while in use. These materials also explain why Bike Seal doesn’t separate, solidify or break down while inside your tyre. This fluid is eco-friendly, contains anti-corrosion inhibitors and won’t freeze unless the temperature plummeted to below -35°C.

Installation couldn’t be simpler! The BikeSeal kit is supplied with an extension nozzle and valve core remover. Deflate the tyre, remove the valve, position the valve at either ‘five’ or ‘seven’ (clock face) and squeeze it in! You can view how much BikeSeal is needed for your motorcycle tyres on the BikeSeal website. Alternatively, our trained technicians can fit BikeSeal to your tyres in our workshop with ease.